It happened again this morning. I was scraping the ice off the windshield of my car and I noticed this all-too-familiar feeling inside me.

It was part anxiety, part guilt. The ominous feeling that I had done something wrong.

And I was already punishing myself, imaginary whip in hand, deep in self-flagellation. 😔

Had I actually committed some egregious act? NO! Absolutely not! But somehow, when I wasn’t paying attention, my psyche had been doing a slow rolodex crawl through the recent history of my every action and uncovered what it judged to be a heinous crime: I hadn’t gotten back to a friend in time to make plans!

Hardly a crime worthy of 39 lashes.

Believe it or not, this seeking of your own wrong-doings is one of the many tasks that your Inner Critic can take on. Tasks like these can show up in the 6 distinct roles, or jobs, of the Inner Critic.  In this case, in the role of the Crime-Stopper.

Your Inner Critic may play the role of the Crime-Stopper if you:

Continuously review your actions. This might happen immediately after an event in which you were vulnerable, such as a presentation or a personal interaction.This reviewing may also frequently occur at night, as you're trying to fall sleep when it can keep you up with racing thought replays of the “crime”.

Can’t let go of mistakes. This often happens because your Inner Crime-Stopper worries about messing up again and fears that if you move on too quickly you might not learn your lesson and mess up again!

Don’t trust yourself. This becomes especially true for those who have a history of addictive behaviors (i.e. drugs, alcohol, gambling, sex addiction or eating disorders). The Crime Stopper gets very nervous that you’ll fall back into the old patterns.

Have a hard-line sense of “right” and “wrong”. It’s good to have a strong sense of your moral compass but the Crime-Stopper sees things in very black and white terms, uses words like “should” and “shouldn’t”, and doesn’t always hold the whole contextual picture with compassion before passing judgment. Now don’t get me wrong, there’s nothing “wrong” with having a Crime-Stopper (although your own Crime-Stopper will naturally have a definitive opinion on this matter!). In fact, the Crime-Stopper is here to help us live in alignment with our core values, staying on the course of our moral compasses. But the problems arise when the Crime-Stopper goes overboard and pushes us into feelings of guilt.

Guilt, as defined by the good old Oxford Dictionary, is “the unhappy feelings caused by knowing or thinking that you have done something wrong”. Unlike shame (guilt’s close cousin) which identifies you as a person that is bad, guilt focuses on your behaviors specifically.

Guilt has its place. But mostly, guilt is terribly overused.  Not only that but it’s one of the most misused emotions we have as humans.

Guilt is designed to help us navigate our actions and behaviors. For example, when I unfairly attack my spouse with misplaced angry words, I actually want my Crime-Stopper to be there to support me. I want the help of a gentle and loving nudge of disappointment in my actions so that I can hold myself accountable and make the necessary changes and repairs in my relationship.

But to rake myself over the coals for not placing a phone call? Perhaps a more useful response might be the gentle reminder that it’s something to keep on the to-do list, or even elevate in priority. But guilt?

When we use guilt as an incentive to get things done we become a slave to our Inner Critics. It leaves us feeling uneasy and anxious.  And when we try to motivate ourselves with guilt, it’s a slippery slope to guilt-tripping others as well. 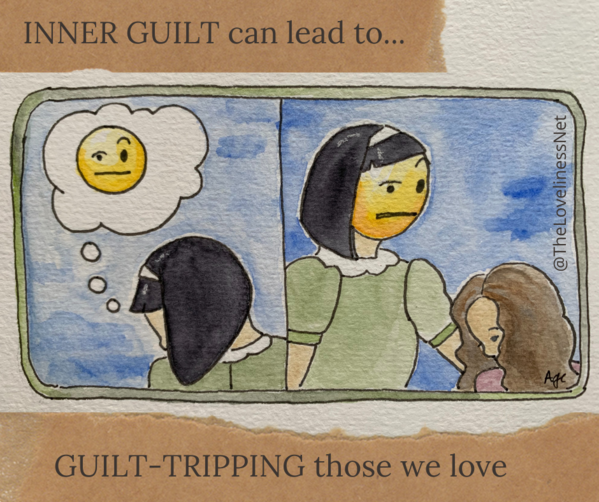 For example, if I’m anxious about not following through with my commitments to my friends, I may be extra harsh on my family when it comes to their relationships and guilt-trip them as a way to incentivize them. “You said you would let Sam know about your plans and now he’s probably given up on spending any time with you”. That’s the voice of the Crime-Stopper.

So how do you turn your Inner Crime-Stopper into the worthy hero that it has the potential to be?!

Acknowledge its mission to serve you. Imagine if this character wasn’t there at all! Sometimes imagining the chaos of a life without your Crime-Stopper is all you need to cultivate a little gratitude.

Spruce up your values. While some of our values are indisputably true at the Soul-level, more often than we’d like to think, there are those that are actually based on outdated or negative beliefs. You can get help with this from a therapist or a course like this one

Loosen your grip on “right” and “wrong”. Sometimes the Crime-Stopper can get so fixated on what it believes to be a wrongdoing that it fails to see what’s actually important in life.

Put your True Self in charge. When your values are truly aligned with your Soul’s intention, then you don’t need to let the Crime-Stopper lead the way. You can trust that your True Self is always going to make the choices that are best for you, even when it doesn’t work out the way you wanted it to.

Cozy up to your mistakes. The lessons from life’s mishaps aren’t always clear from the get-go. But sometimes our mistakes are just what we need in order to learn and grow!

If you are new to the concept of your Inner Critic, you might want to begin to make its acquaintance with this quiz:

And if you’re ready to learn more about your own Inner Critic and other roles it can play, along with the Crime-Stopper, then our course The Six Roles of the Inner Critic might be a great place to start!

The Six Roles of the Inner Critic course 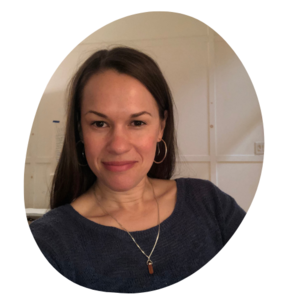 Adrienne Cress is an Expressive Arts Therapist, Coach and Educator. She is the Co-Founder of The Loveliness and has a private practice in Portsmouth, NH.

Sign up for the Ladybug News for more inspiring blogs and to get sunshine in your inbox! 🐞🌞🐞